Tell your friends about Regatta Rumba Sails Unfurled Upon Neptune’s Glass, A Sprinter Unites In The Beat, Under A Melting Sun.

Regatta Rumba Sails Unfurled Upon Neptune’s Glass, A Sprinter Unites In The Beat, Under A Melting Sun.

Medium on Base : Oil on Paper

Born of European parents, my sister Bettina, and I were immersed in everything ‘cultural.’ My Russian father, a professor of music, and first violin teacher of Albert Einstein, together with my Viennese mother, ex-olympian, fashion designer, model, psychologist, artist, and Cultural Attaché to France, both insisted on the very best kind of academic instruction. Throughout our formative years, my sister and I were surrounded by the constant influx of friends' of my parents. Artists, actors, concertizing musicians, opera singers, poets, writers, and an all-sorts collection of academics and professors would visit our modest home. On one of dad’s numerous working ‘holidays’ abroad, we attended the premier of “Hair” held at the Public Theatre, just 'Off Broadway.' Seated in the front row, actually on the stage itself, we were instantly integrated into the performance, after which our lives were immediately changed. Freedom of expression, vibrant positive energy, colour, nudity, a portrayal of spirituality, joyfulness, [bliss via music and dance, performed by a cast of black and white actors], impacted upon our conservative, ‘classical world'. For me, the auspicious words from Hair's glorious anthem, the ‘Age of Aquarius,’ coupled with the remarkable lucidity of the nude human forms absorbed so passionately in dance and song, was to inspire future notions, and influence the style and the nature of my expression.

At college, I majored in 3D Sculpture and Figure Drawing, studying with artists John Money and Warren Breninger. Both became established artists in their own right, their works attaining place in numerous collections internationally including the NGA and NGV. I was also extremely fortunate to have met David Jack, son of Kennth Jack, an amazing Watercolourist and extraordinary Printmaker. [Ken, coincidently, lived just a block from my family home in Malvern]. On occasion, David and I would catch up at his dad's studio, which was situated at the back of their home. There we would watch Ken at work, printmaking or painting, and occasionally demonstrating his magic on sheets of butchers paper, or coorigated cardbord, and which I was on rare occasions permitted to take home.

I had studied under painters Victor Majzner, Gareth Sansom, Peter Campbell, painter and Master Printmaker-Geoff La Gerche, sculptor, Robin Angwin, and the wonderful Judy Spafford, my life-drawing tutor. Judy was an exceptional teacher and artist, whose strong and uncompromising intellect, skills and astonishing insight, enlightened and envigorated my respect for the human form. From Judy I not only learnt to appreciate the anatomical structure of the body, but to realize the very real importance of its surrounding space. I learnt that relationships, connections and the interactions that the body experiences, will shape its next action and that it has the capacity to sense itself as living within its whole context; the situation. It has been these learnings, thanks to Judy, that have held me in good stead over time, guiding my hand and opening my mind.

I was also privilaged to meet and learn 'tricks' in drawing techniques, and share 'ideas and inspiritations' with artist Louis Kahan, a frequent visitor to our family home, and close friend of my parents.

In later years I joined my mother Ruth on her travels to Seguret, a tiny village located in the magical Provence, in the South of France. There atop Mt Ventoux, and known since the Romans Securitas, Atelier de Seguret sits nestled above the Rohne valley, dominated by the ruins of a twelth century fortress. I was privilaged to meet, watch and learn from artists at work; painters, print-makers, sculptors, photographers, [just to name a few], each, a principal artist and ambassador of their respective country. Seguret continues to be a melting-pot of creativity. Undoubtedly, my experiences there have each,[in some small way], impacted my expression.

Now 40 years on [a semi-retired teacher/tutor], I have started my own artwork, after having been badgered over the years, by family, friends and pupils to do so.

Essentially, my imagery is largely inspired by the human form, but may also be reflective of ideas associated with politics, music, nature, art and cultures of past and present. In a sense my works could be likened to existential mappings that invite engagement and discovery via central themes such as purpose, family, dance, truth, communication. compassion, joy, peace, the intrinsic notions of a good book, or an inspirational poem, song, film or even architectural structure.

More faves include the sui generis of Peter Greenaway's 'The Cook The Thief, his Wife and her Lover', truly a frame by frame masterwork of astonishing artistry, where opulence and decadence,savagery and extremeism coupled with a nightmarish colour-scheme corrupt the soul, underscoring our dialogue with raw gluttony and barbarism. Although written in a moment of rage, Greenaway's imagery does recall the fleshy aesthetic of pure Renaissance form, also in a sense reminescent  of Bill Henson's  aesthetic [to which I am drawn for visual respite; thank goodness!] So too 'Prospero's Books,' and 'Pasolini's' 'The Decameron', have  each left their their indellible mark. Lastly, off-beat architects Bernard Tschumi ,[and his nonsensical Parc de la Villette] in sync with the futuristic madness of Lebbeus Woods and the glorious aesthetic of Frank Gehry’s avant-garde designs, each, in some capacity, have continued to inspired notions, or affect my experimentation and evolving style and maybe even character of my work.

Other inspirational 'avant-gardists' include an artist/designer cocktail of such icons as Christian Dior, Issey Miyake, Alexander McQueen and Guy Bourdin. Then, in a league all on his own, is the godfather of all architectural thinking, the virtuoso himself Gaston Bachelard, whose existential writings recorded in his masterwork "Poetics of Space," is truly one of the most poignant and certainly  the penultimate of any intellectually challenging text.

My painting style is largely unconventional, in truth almost sculptural. I render the the figure in an almost bas-relief manner, [clearly a left-over from my large-scale sculpturing days when I worked in wood, metal, plaster and resin, using chain-saws, welding equipment and casting processes]. Now, I 'shape' the layers of paint, as if modeling clay, building then eradicating the textural layers, then re-applying, eroding and re-building once again.

This process of structuring then carving back into the architectural form of the built paint and then once again re-applying more colour is repeated multiple times, until the anatomic elements become almost three-dimensional on the picture ground. Its a complicated and wonderfully unpredicatable process, as I never know exactly how the outcome will result. On occasion I will insert poignant text for emphasis sake.

Some of my works may be perceived as provocative or even chaotic, others will speak of quietness, possibly featuring an icing of anecdotal humour.

Concepts for recent works stem from my collection of 2 minute lengths of footage of friends and families enjoying a summerbreak vacation on Riva Bella Naturism on Corsica. I carefully examine these films frame by frame, then select 'stills,' which I then portrayed. These short but invaluable films continue to provide me with sumptuously unique and original material.

Put simply, my artworks are intended to be understood as visual narratives that define my beliefs, imaginings,and understandings of the human condition.

My hope is to move, inspire, challenge,and invite questioning.

-Bachelor of Arts, including [Honours Year and Thesis Book]

-Bachelor of Architectural Design, including [Honours Year and Thesis Book]

[Presently working towards an Exhibition to be held in 2021 Melbourne] 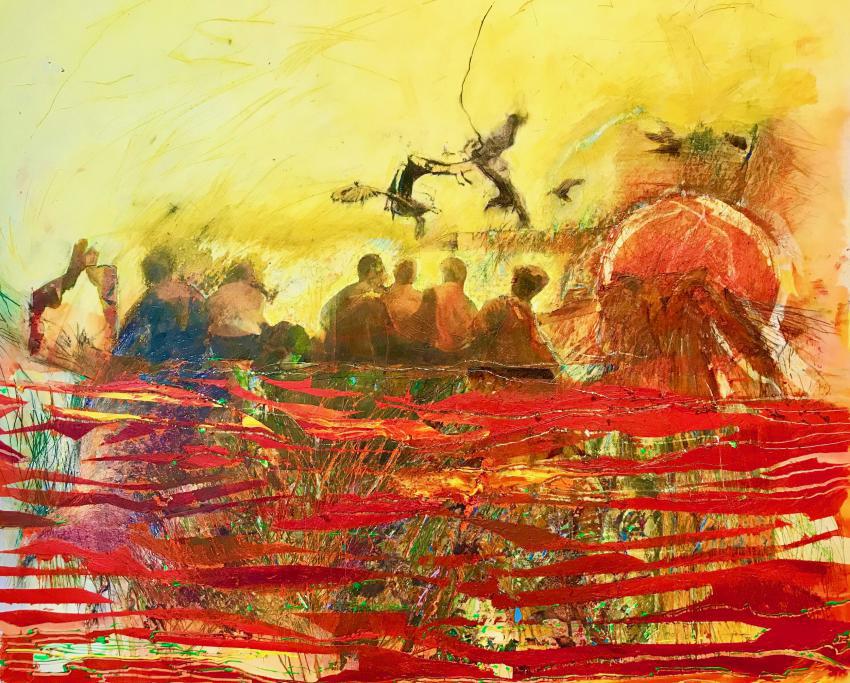 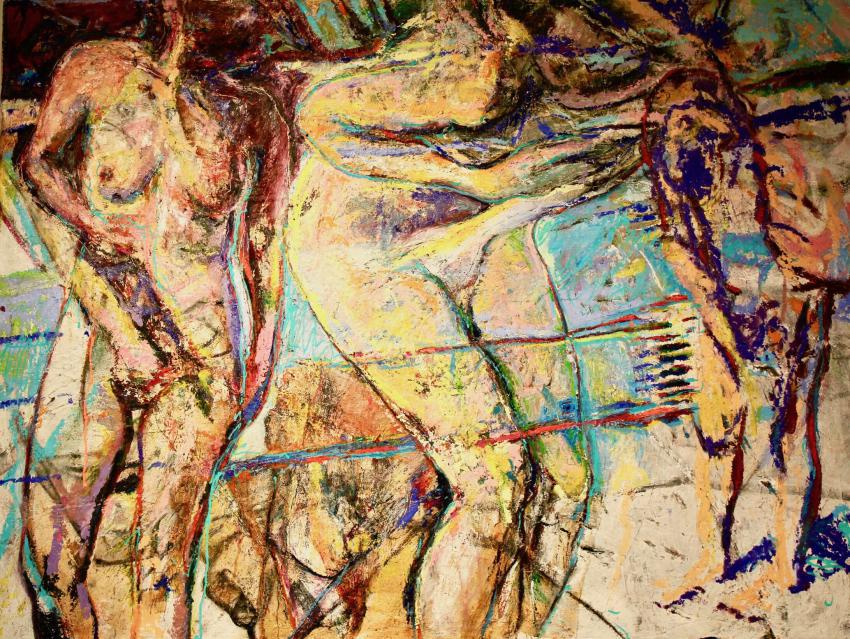 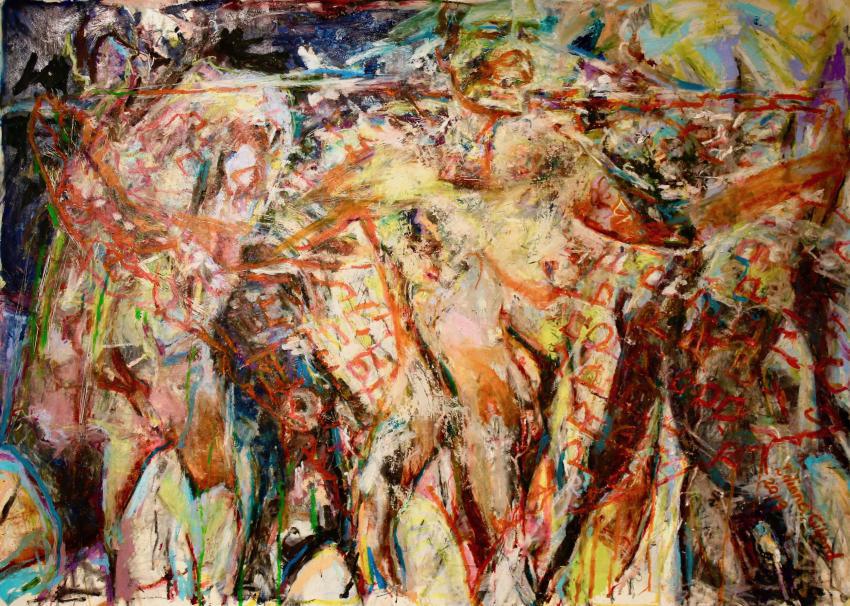 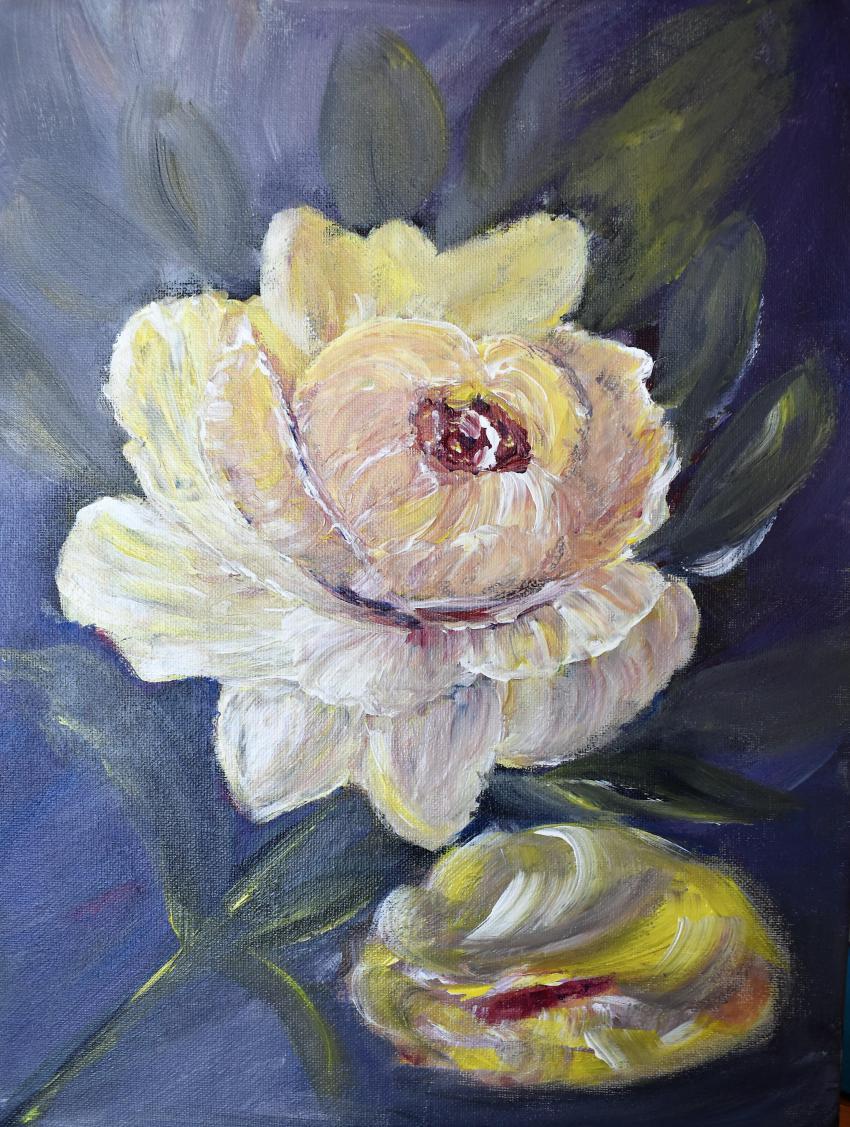 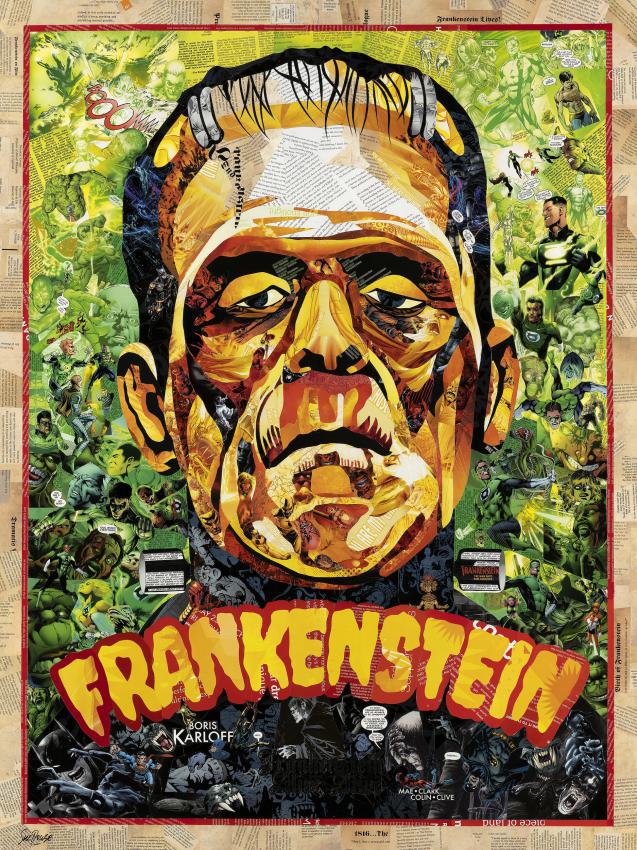 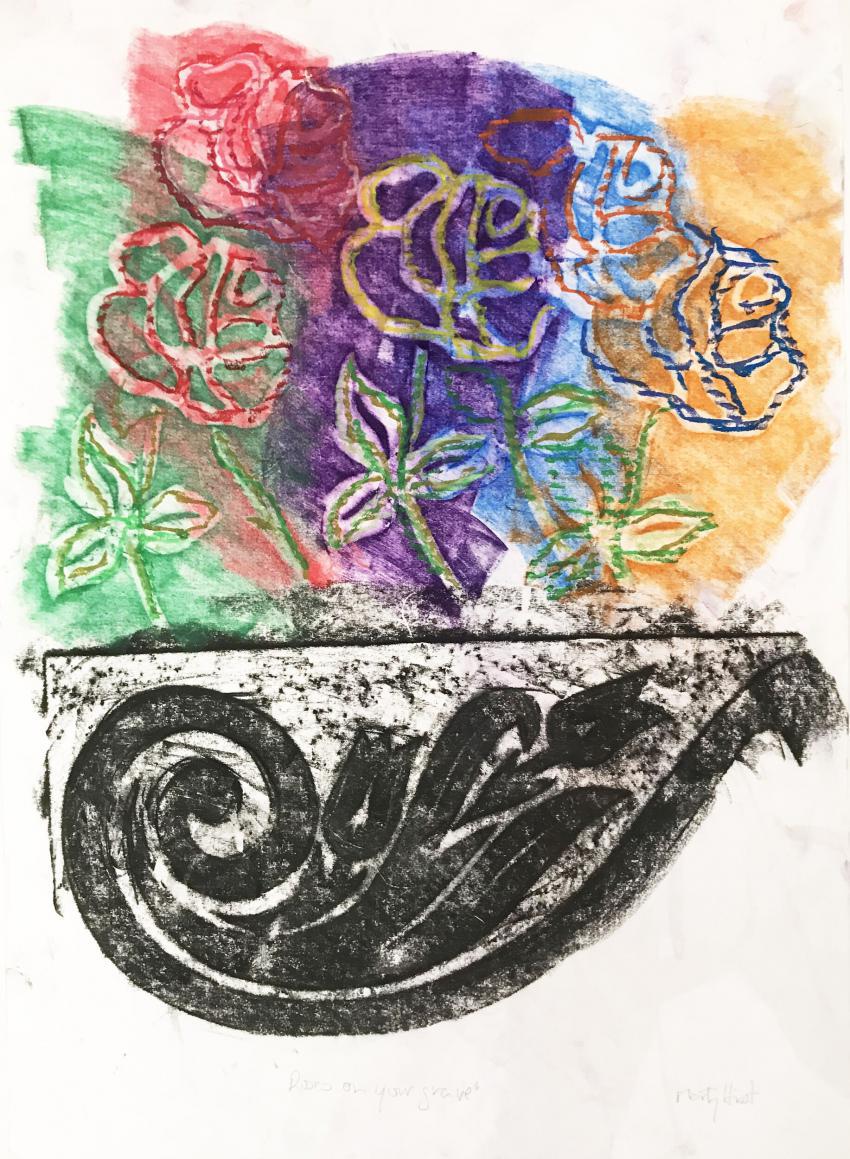 Roses On Your Grave 1 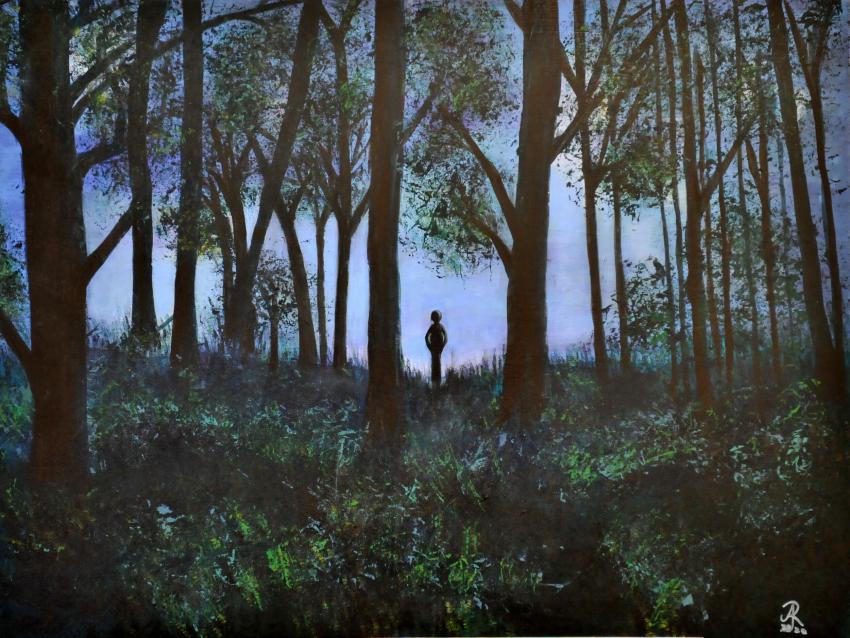